An employment report released on Jan. 9 by the National Federation of Independent Business (NFIB) shows that in the final month of 2019, small business owners continued to hire employees, add new positions, and raise wages.

“2019 was a strong year for small businesses across the country,” said NFIB Chief Economist William Dunkelberg. “Because of regulatory and tax relief, owners were able to invest in their businesses and employees throughout the year.”

Nineteen percent said they plan to increase total employment at their firm, while 5 percent indicated they plan cuts. 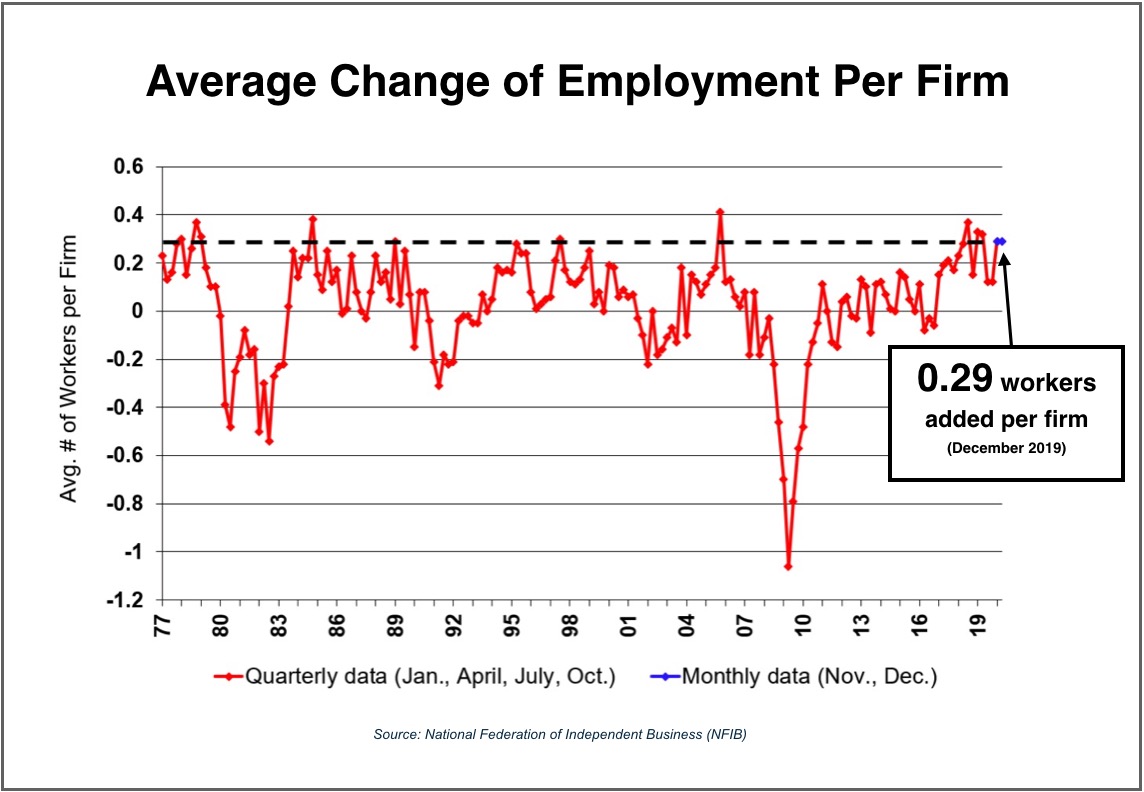 “The inability to assemble work teams is a key contributor to the comparably lackluster performance of the construction industry as evidenced by the December figures,” Dunkelberg said. “Owners are raising compensation in order to attract more qualified applicants to fill open positions.”

A near historically high percentage of owners said they raised or plan to raise worker compensation.

Twenty-nine percent said they had raised wages in the last three months and 24 percent reported plans to do so in the coming months. 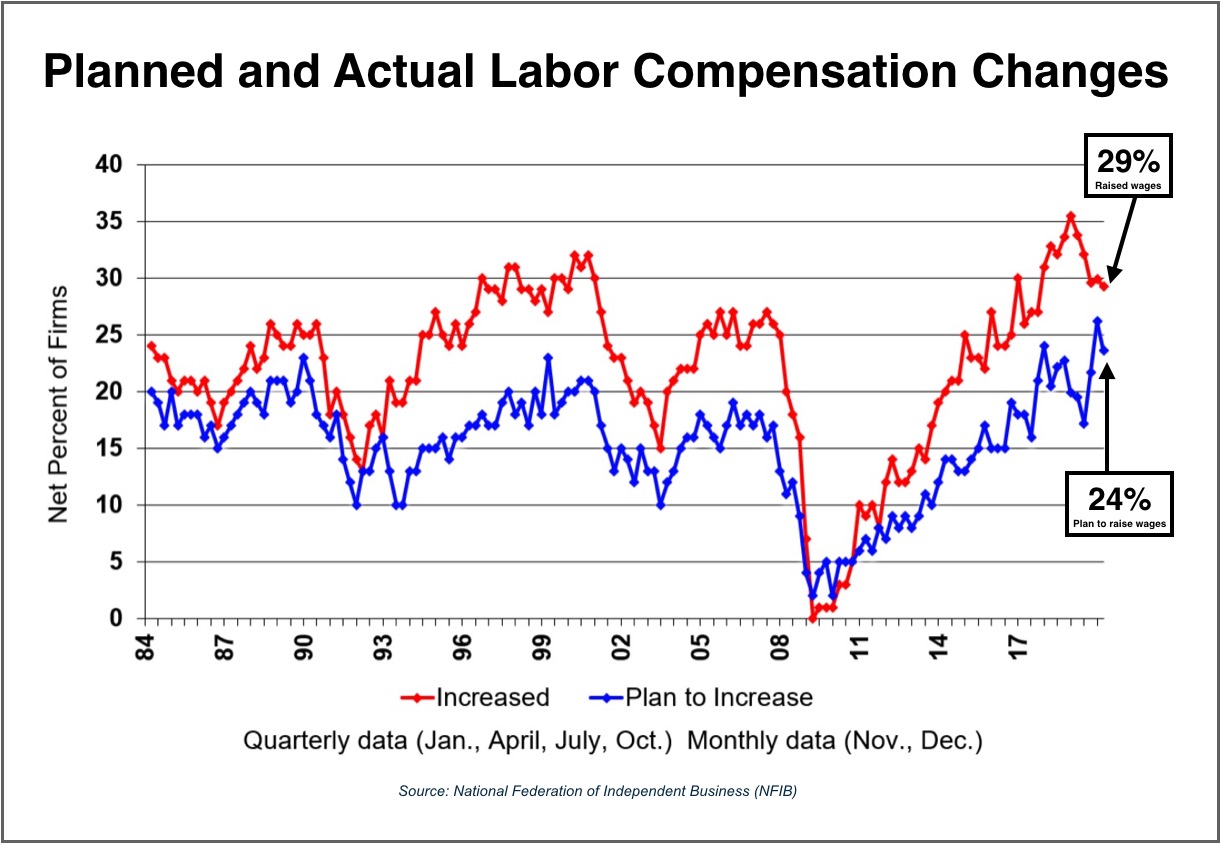 While at near-historic levels, planned and realized small business wage growth softened compared to November, when a net 30 percent of owners, seasonally adjusted, reported raising compensation, while 26 percent said they planned to do so in the coming months.

“Despite a tight labor market, small business owners are doing exactly what they said they would do thanks to tax relief. Theyre creating new jobs and raising compensation at record levels,” said NFIB President & CEO Juanita D. Duggan. “The only thing holding them back continues to be finding qualified workers, but in spite of that challenge the small business economy is roaring.”

Still, weaker small business compensation growth in December mirrored that in the broader economy, with the pace of hourly wage growth falling below 3 percent in December for the first time in a year and a half, according to reports.

Hard to Come By

Fifty-three percent of owners reported hiring or trying to hire, but 94 percent said they found few or no qualified applicants, the NFIB report said.

Difficulty finding qualified hires was particularly significant in construction and manufacturing. Sixty-two percent of construction firms reported few or no qualified applicants and 46 percent said their biggest business issue was a shortage of qualified workers.

“Growth is clearly constrained in these important sectors by a shortage of workers,” the report noted (pdf), with 61 percent of owners reporting job openings in construction that they could not fill.

The strong December figures build on November data, which showed that small business optimism posted the largest month-over-month gain since May 2018.

“This historic run may defy the expectations of many, but it comes as no surprise to small business owners who understand what a supportive tax and regulatory environment can do for their companies,” Dunkelberg said of Novembers stats. “As the two-year anniversary of the Tax Cuts and Jobs Acts passage approaches this month, small businesses, the worlds third-largest economy, are using those savings to power the American economy.”

The U.S. economy is now in its 11th year of a record-long economic expansion.

“Were in a virtuous economic cycle now where low unemployment, continued job growth, and rising household income are the fuel powering consumer spending. Consumer spending is the pillar on which the U.S. economy rests, with 68 percent of economic output tied to it,” said Greg McBride, Chief Financial Analyst at Bankrate, in remarks to The Epoch Times. “When that virtuous cycle starts to show cracks—such as rising unemployment that undercuts the ability and confidence of households to spend—thats when we need to worry the expansion is coming to an end.”

According to the nonfarm payroll figures, released on Jan. 10, 145,000 jobs were added in the final month of 2019. This is broadly in line with expectations that the numbers would come in lower than the exceptionally strong November data.

Economists polled variously by Reuters and MarketWatch were expecting to see the pace of new job creation slowing in December from an unusually robust 256,000 jobs added in November, revised down in this report by 10,000. The outsized part of the November gains was widely attributed to General Motors workers returning from a strike.

Another part of Decembers slowdown could be due to seasonal volatility associated with a later-than-normal Thanksgiving Day.

“The relevant comparison is not December versus November, but against economists expectations,” explained Robert Johnson, Professor of Finance at Heider College of Business, Creighton University, in remarks to The Epoch Times. “The consensus estimate was for 160,000 jobs to be added. While slightly lower than expectations, the DecRead More – Source

Chinas Passenger Car Sales Tumble 92% in First Half of Feb. Due to Virus Outbreak