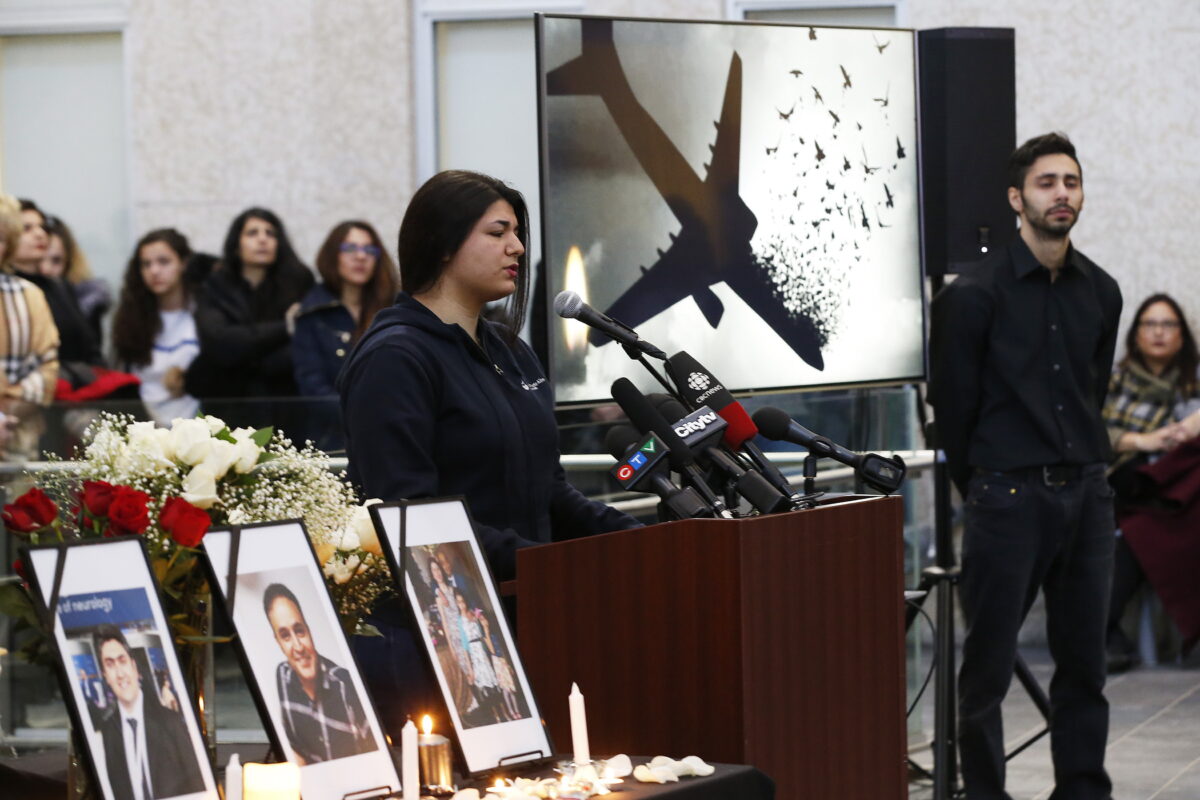 As Iranians took to the streets en masse to protest the shooting down of a Ukrainian plane by Iran on Jan. 8, killing all 176 passengers on board including some of their fellow citizens, political fallout in Canada took a different course.

Five days after the crash in which 57 Canadians also died, following a barrage of questions from reporters on whether U.S. President Donald Trump was to blame, Prime Minister Justin Trudeau took to Global News and more or less blamed the United States.

“If there were no tensions, if there was no escalation recently in the region, those Canadians would be right now home with their families,” Trudeau said when asked if the Canadians killed in the crash were “collateral damage in the tensions between Iran and the U.S.”

The same evening, just before Trump boarded Marine One to attend a college football championship game, he told reporters, “We killed Soleimani, the number one terrorist in the world. … When the Democrats try to defend him, its a disgrace to our country.”

Trump was of course referring Gen. Qasem Soleimani, the leader of Irans clandestine Quds Force who was killed by a U.S. drone strike in the parking lot of Baghdad Airport on Jan. 2. Quds is a branch of Irans Islamic Revolutionary Guards Corps (IRGC), which has been designated a terrorist organization by the United States, Bahrain, and Saudi Arabia.

Through 2019 Soleimani orchestrated the downing of an American drone, the commandeering of foreign-flagged vessels in the Persian Gulf, and a missile attack from Yemen on Saudi Arabian oil facilities.

It was also Soleimani who organized the Dec. 31 assault on the U.S. embassy in Baghdad that was carried out by Iranian-backed militia. The mob laid siege to the compound, battering down gates, windows, and doors, setting fire to and ransacking the reception area, and tagging the walls with anti-U.S. graffiti.

Minutes later, shrapnel from a surface-to-air missile launched from inside Iran disabled an engine on the plane, which ultimately caught fire before it slammed into the outskirts of Tehran.

Despite Canada having listed the Quds Forces as a terrorist entity, Trudeau framed Soleimanis killing as “escalation” rather than “deterrence.”

“It is a reminder why all of us need to work so hard on de-escalation, on moving forward to reduce tensions and find a pathway that doesnt involve further conflict and killing,” he said in the Global News interview.

At a press conference in Ottawa, Trudeau dodged questions on whether Soleimani was a legitimate target based on Quds Forces terrorist entity designation in Canada. He also avoided accepting what Defence Minister Harjet Sajjan had earlier acknowledged: that the strike was “an act of deterrence” that was carried out based on U.S. intelligence.

On Jan. 4, two days after the U.S. airstrike, a candlelight vigil for Soleimani was held in downtown Toronto; counter demonstrators showed up and police had to separate the factions.

Similarly, Canadas federal opposition parties are also at odds. Like Trudeau, the New Democrats accused Trump of stoking conflict in the region—albeit in harsher tones—while the Conservative Party said Soleimani was guilty of the same.